When buying a gaming monitor, one of the characteristics in which we have to pay close attention if we want to obtain maximum performance is its response time .

Of this concept, which you have surely heard many times, the vast majority of users know that “the less, the better”, something that, of course, is totally correct. But, do you know why?

To answer any questions, in this article we are going to explain in a simple way what the response time of a monitor is. And most importantly, why is it so decisive in the experience offered by a gaming monitor.

The response time in a monitor: when the ms make the difference

In a simplified way , the response time of a monitor is the time it takes for a pixel to change color when we are playing any type of content.

This performance, which is measured in milliseconds, gives us very valuable information to the time to choose a good gaming monitor, since a high response time can completely ruin our gaming experience.

In practice, this means that, especially when we are reproducing images with a high speed of movement, the panel of our monitor is not able to change the color of the pixels quickly enough.

This gives rise to different problems, such as loss of sharpness in the image or the appearance of the dreaded ghosting effect, a stel a of “ghost” pixels that appear behind moving objects.

On the other hand, if we are fans of competitive gaming, having a monitor with the lowest response time gives us a great advantage, especially if we play with a high fps rate given, since it allows us to react more quickly and precisely, for example helping us to sharpen our aim in a shooter.

Currently, in the market for gaming monitors we find a large number of models that start from than 5 ms, which is a good figure.

But if we want toachieve the best possible performance we have the possibility of betting on a monitor with only 1ms of maximum response speed, something really impressive.

One of the main standards in this regard is, without a doubt, the LG UltraGear range, which offers us different monitors adapted to each type of player, but they all have important denominators in common.

These are: 1ms of maximum response speed in some IPS panels or NanoIPS, which In addition to allowing us to enjoy constant colors at a 178º viewing angle, they are capable of showing the best quality d and image and to work at very high resolutions and refresh rates, always in combination with the most advanced technologies, such as AMD FreeSync™, Nvidia G-Sync, DAS or Black Stabilizer. 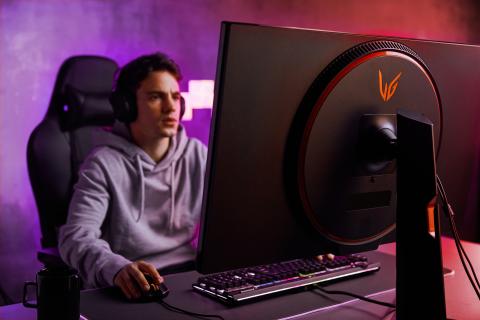 For example, and if we are looking for a large size gaming monitor with maximum performance , the LG UltraGear 34GN850 impacts for its 34″ UltraWide NanoIPS panel, or what is the same, of 21:9 format, which allows us to enjoy 32% more useful area.

This panel, which offers a resolution of 3440x1440P, has a refresh rate of 144Hz and only 1ms maximum native response speed, which guarantees maximum image sharpness and great responsiveness.

These figures are combined with the more vivid colors and contrast offered by its VESA DisplayHDR 400 certification, as well as its compatibility with AMD FreeSync™ Premium and NVIDIA’s G-Sync interface, which ue together with technologies such as Dynamic Action Sync, Black Stabilizer and Crosshair, offer great image quality and performance in all types of content.

In addition, its virtually borderless design offers a more immersive and fluid user experience, and is ideal for multi-monitor setups, for example, in flight or speed simulators.

Often, when we talk about the response time of a gaming monitor, we focus on PC video games , but this feature is also decisive on the console.

Thus, if in addition to looking for a monitor with the lower response time and the best performance on PC, you also want to get the most out of the new generation consoles, the LG UltraGear 27GP950 is a good candidate.

And it is that Thanks to its 2 HDMI 2.1 inputs, this monitor is able to take full advantage of the capabilities of PS5 and Xbox Series X/S, allowing you to enjoy your favorites on console with rates of up to 120 fps and compatibility with VRR (Variable Refresh Rate). 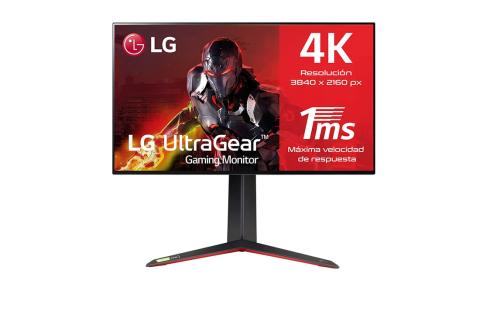 And all this, of course, with 1ms maximum response speed on a 27 NanoIPS panel inches and 4K UHD resolution (3840×2160), which make it a versatile gaming monitor.

In addition, they have not forgotten the design, in which the integration of Sphere Lighting 2.0 stands out, the rear light ring that reduces eye strain and increases immersion thanks to its two modes: Sound Sync, which synchronizes the lighting according to the sounds of the game, and Video Sync, which does the same with the effects visuals.

Another aspect that we must consider in a gaming monitor is its versatilityandergonomics, since we often do not have much space on our desk and, in addition, we may need Have an all-terrain monitor, or what is the same, that is as effective when playing games as it is for performing other tasks, such as teleworking, video editing or the broadcast of streaming content.

Here, having a minimum response time is also decisive, so if we do not want to give up anything, the LG UltraGear Ergo 27GN88A is a great option.

The main differentiating point of this monitor is the inclusion of its LG Ergo™ arm, an ergonomic support with C-clamp and grommet, which allows for expanded extension, retraction, swivel, pivot, height and tilt adjustment, as well as ideal screen position, offering up to 395 points of view (280º of rotation. 25º tilt and 90º swivel).

The possibilities of this solution are almost endless, since it allows us to place the monitor in any space and , for example, pivot your screen 90º to make it vertical.

Regarding its specifications, the LG UltraGear Ergo 27GN88A mounts a 27-inch NanoIPS panel and QHD resolution (2560 x 1440), which offers a refresh rate of 144Hz and 1ms maximum response speed.

Thanks to its compatibility with HDR10 content and its wide color spectrum (98% of the DCI-P3 color range) this monitor offers great image quality, as well as excellent video game performance, as it is compatible with NVIDIA® G-SYNC® and AMD FreeSync™ Premium.

As in the previous models of the LG range UltraGear that we have told you about, the LG UltraGear Ergo 27GN88A also integrates Dynamic Action Sync, Black Stabilizer and Crosshair technologies, which makes it a great gaming monitor that combines maximum ergonomics and versatility with great image quality and performance.

The LG UltraGear range of monitors offers great image quality and maximum performance, allowing you to has led us to be leaders in the gaming monitor sector and LEC’s official gaming monitor partner(League of Legends European Championship).

In the LG store you can choose the one that best suits your needs.