In the mid-1980s, personal computing jumped from the command line and text mode to the desktop: we all know, for example, that MS-DOS released its Windows at that time, such a product successful that it would end up cannibalizing its source operating system.

But things could have been very different: the majority graphical interface for DOS users may not have been Windows, but a desktop called GEM. We tell you what happened to him…

The graphical computer interface (windows, pointers, icons, menus…) was born in the Xerox-PARC laboratories in the early 1970s. However, it was because the market was not ready for Due to Xerox’s lack of commercial vision, Steve Jobs had to arrive (whom Xerox had invited to its facilities) to copy it, popularize it and get rich.

But Jobs was not the only one who exported the idea from Xerox-PARC: Lee Jay Lorenzen had left these laboratories to sign up for Digital Research and develop GSX ( Graphics System Extension), a library released in 1984 for CP/M-80 and CP/M-86 (later also ported to MS-DOS) that made it easy to provide graphics capabilities to software. 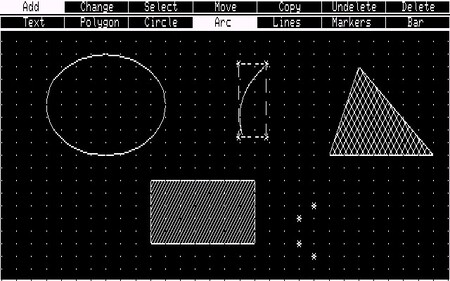 DR-Draw, a Digital Research program based on their GSX library.

But as they prepared to release GSX, Digital Research realized that it could use that library to bring its own graphical interface to market, one that was inspired by the general idea developed by Xerox, just as Apple was already doing at that time (Apple Lisa had also been launched in 1984).

Unlike them, Digital Research had no intention of also developing the rest of the operating system: their idea was to provide a ‘desktop’ created by third parties to the most popular operating system of the moment: DOS (a category that includes both Microsoft’s MS-DOS and other systems derived from it).

And it is that DOS lacked until now a graphical interface, depending only on the command line. Being responsible for transporting its extensive user base to interface computing, which was already emerging as the future of the sector, could guarantee Digital Research (DR, hereinafter) considerable income.

So DR decided to develop GEM Desktop (for ‘Graphics Environment Manager’) and present it at the COMDEX (‘COMputer Dealers EXhibition’) in November 1984. The first version (also known as GEM/1) would hit the market three months later, already in 1985. 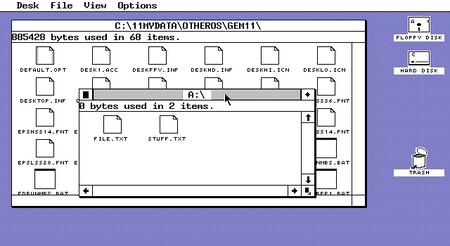 As you can see in the screenshots, the basic elements of your daily graphical interface were already there: the Desktop icons (including the Recycle Bin), the File Explorer, the menus…even animations when opening and closing windows.

It included a standard word processor, GEM Write, which was nothing more than a modified version of IBM’s Volkswriter (in addition to this proto-WordPad, the GEM ecosystem also included GEM Paint, although it was sold separately) . Later, the third version of GEM, GEM XM, would add features such as the Clipboard, which made life much easier for everyone who had to work in front of a PC.

Litigation with Apple and brief success

How did the market receive GEM Desktop? Well, its launch meant the immediate filing of a lawsuit by Apple, which accused DR of plagiarizing the ‘look&feel’ of Apple Lisa (although both were inspired by Xerox Alto).

Xerox PARC: this is how they worked in the magical place from which Steve Jobs copied the MacOS interface

The ensuing legal battle forced DR to gradually change elements of GEM’s interface to please Apple: among many other things, it had to change icons, suppress window opening and closing animations, and force because the windows could not be moved, resized or overlapped with each other.

Despite these setbacks, for a time success smiled on GEM Desktop: not only did it triumph in Europe by being included pre-installed on the first—and popular—Amstrad PCs with MS-DOS (PC-1512 and PC-1640), but also that Atari licensed GEM to include it as a basic component of their Atari TOS operating system (actually GEM Desktop + an MS-DOS clone developed by DR).

Interestingly, Apple’s lawyers ignored this version of GEM, which was able to keep all the aforementioned features. 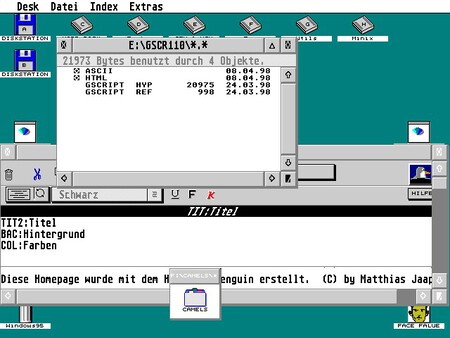 GEM version for one of the latest ATARI TOS releases.

Windows arrives, GEM dies (and is reborn as free software)

But by the end of 1985, the developers of MS-DOS had released their own graphical interface for that operating system: MS Windows 1.0.1. Shortly after, MS Windows 2.0 would arrive, which generated its own legal battle with Macintosh, which soon began to remove developers and users.

And GEM? Little had to do with a graphical interface created specifically by the creators of MS-DOS for MS-DOS, which offered a streamlined integration with the operating system.

Why Windows is called Windows: this is how the idea of ??a marketing and cream expert who knew nothing about computers was born

With Windows 2.0 progressively increasing its share of users, by 1988 GEM had already been practically expelled from the market (aside from its use on Atari computers) and, despite several attempts to refocus its development, it would remain canceled in 1991, after the sale of DR to Novell, which immediately resold the rights to GEM and its derivative projects to another company, Caldera.

Caldera would end up releasing the code for GEM Desktop under the GNU license, giving rise to FreeGEM and OpenGEM. The latter still receives updates from time to time (the last one in 2018) thanks to the support of the FreeDOS project, the free clone of MS-DOS (of course, it is also compatible with the latter).