The icon of Google Chrome evolves again after eight years of its last change. Although it has not been a very drastic change, it is one more step towards the simplicity and minimalist design that Google has been taking for some time now.

According to one of Chrome’s designers, Elvin Hu, users with the Chrome Canary update can already appreciate this design right away. The idea is that this logo will appear in the coming months on practically all devices on which Google Chrome is available.

One more step towards simplicity

The company hadn’t touched any of its logo since 2014, one that has been changing to an increasingly flat design over the years. In this case we observe changes in the tone of its colors and proportions. In addition, the few remaining shadows of the logo have been removed, transforming it into an even flatter design. We also see how the central circle has widened, occupying something more than in previous designs.

The logo has some more vibrant colors, and a certain gradient between green and red has also been applied. This last detail is explained by Elvin Hu in the Twitter thread dedicated to it, although it is practically imperceptible to the human eye. 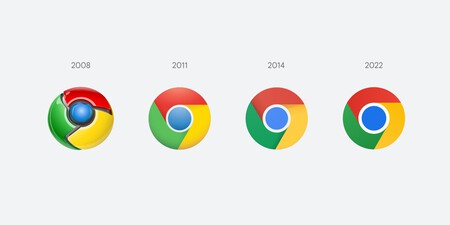 This new design will be consistent with the visual style of each operating system. This means that there will be certain variations of the Chrome logo depending on whether it is on Windows, Chrome OS, macOS, or mobile devices. In this way, it will be better integrated with the operating system while its design remains recognizable by everyone.

The design team reconsidered introducing totally different colors, although this made it more difficult to recognize according to Hu, especially next to other Google applications.

It is expected that in the coming months we will be able to see this redesign not only in the icon of our operating system, but also within the app and desktop versions.