We have already talked about giving someone your ID through Wallapop or some communication app can result in a long-lasting torment.

We verified that there are scammers who need to obtain identity documents to give them to the victims of Wallapop scams when they ask for them, as proof that they are legal persons and have no problem offering their documentation as a symbol of good faith. faith in the sale.

Wallapop and Facebook Marketplace are a nest to steal your personal and bank data: a guide to know how to identify them

Well, this problem does not seem to have found a solution and now something similar can happen to you in WhatsApp. A woman shared on her Twitter how they wrote to her , supposedly, from the University Hospital of the city of León to offer her a job contract.

In the conversation, the caller from the supposed hospital sends him a DNI so that the other person trusts who he is talking to and thus makes him a payment that he requests to do an antigen test to join the job and that the alleged future employee must pay.

Then you can be reported without having done anything 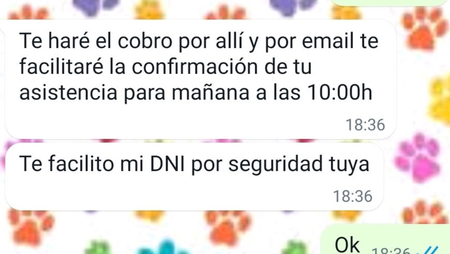 This user who makes this public complaint, later also sued what happened before the authorities and thus found out that the DNI she received belonged to a girl from the Canary Islands whom she scammed days ago and I already had several complaints in Zaragoza without knowing why.

In other words, this girl from the Canary Islands was denounced by various people when in fact she had been the victim of the robbery. And now it remains to be seen (if it becomes known) the number of complaints and even trials that this victim will have to endure, just for giving her ID to an unknown person.