“Something went wrong, but don’t worry, it’s not your fault. Let’s try again”. This is the message that Twitter has shown for almost half an hour, along with an ‘Update’ button that, no matter how hard we press, it only leads us to a repetition of the same message.

Indeed, you are not the only tweeter whose social network has been failing in the last few minutes: a little before 6:45 p.m. we detected this problem that, according to the DownDetector website, per hour more than 26,000 users have been notified, both of the web version and the mobile app.

From 19:10 until now, it is possible to log in again, but it keeps failing at times. According to the Twitter Status website, it is not technically a “crash” (although for 25 minutes it has prevented any access to the social network), but a case of “degraded performance”.

Not a ‘crash’, just a case of ‘degraded performance’ (but crash is crashed)

For now, the company has not issued a statement on the reason for this fall that affects —at least, and that we have been able to verify for now— Europe and America, but the Twitter page Status shows us this an “API Error 500/400” notice:

“We have been experiencing a high level of API errors as of 18:41 and are currently investigating this. The presence and extent of any client impact have not been determined at this time. time, but we’ll provide an update as soon as we know more.”

Twitter’s problems seem linked to RESTful technology: that is, to a web service that works on REST (REpresentational State Transfer) architecture: 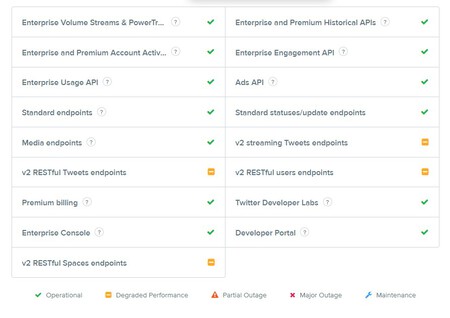 “We fixed a technical bug that was preventing timelines from loading and Tweets from posting. Things should be back to normal now. Sorry for the interruption!”