Since this morning, many users have been commenting on social networks that they are unable to access BBVA’s online banking service. Issues are being experienced from both the web and iOS apps on iPhone and Android.

The problem is recognized by the app itself, which warns of the problem when trying to access:

Problems that add up to more than seven hours now 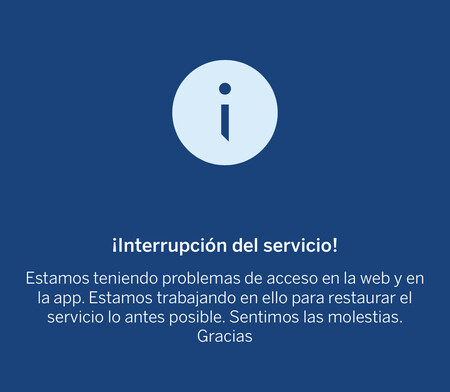 BBVA’s Twitter profile has been reporting for about seven hours with a message like the one above about the service problems they have, and they say they have detected where the origin of the incident is. From BBVA they have not told in greater depth about this drop in service.

The problem goes beyond simply not being able to look at the balance or make a transfer. Services such as Bizum or bill payment also depend entirely on banking applications, and many users complain about the situation in urgent situations. From the web, the message is “It looks like something went wrong. Online banking is not currently accessible for technical reasons. Please try again in a few minutes.”

The BBVA website has recently been used as a hook in SMS phishing scams, and some users may think that it has something to do with it. But fortunately not, BBVA has problems just like Facebook, WhatsApp or Google have had in the last year.