Meta, the company that owns Facebook, is betting heavily on artificial intelligence as one of the main pillars of the development of its Metaverse. As explained today by its CEO during an online event, Mark Zuckerberg, and several of the company’s directors, “AI is the key to unlocking many of the advances” that the company’s great future project requires.

Among these advances, two stand out, both related to the use of language. The first, the dream of a universal translator, that allows the users of the Metaverse to communicate without the barriers established outside of it… and on the other, the creation of virtual worlds through the mere commands of voice. Let’s see what each of them consists of:

ZAO, the Chinese MOBILE APP that through DEEPFAKE turns you into DICAPRIO in SECONDS

The dream of a universal translator

“The ability to communicate with anyone in any language is a superpower that humanity has always dreamed of… and artificial intelligence is going to make it possible for us to see it”, Zuckerberg has claimed.

“Removing language barriers would be a substantial achievement that would make it possible for billions of people to access information online in their favorite language.”

Meta considers that speakers of the most popular languages (such as English, Mandarin Chinese or Spanish), already have adequate support from the currently available translation tools.

But the 20% of the world’s population that does not know any of these languages ??finds itself in a very different situation: fragmented between multiple minority languages, none of which have an extensive catalog of texts that allow them to train with them AI models.

Searching for the Ultimate Universal Translator: From Tarzanic Systems to the Telepathic Cloud

To do this, there will be two principles pursued by Meta AI research applied to translation:

“Imagine a market where speakers of different languages ??can communicate with each other in real time using a phone, a watch or [smart] glasses,” proposes the Meta AI blog…

…however, Meta should learn to walk before running: its still flagship product —Facebook— suffers from serious problems detecting ‘hate language’ in any language other than English >, as the leak of the ‘Facebook Papers’ already made clear.

Create worlds with your voice 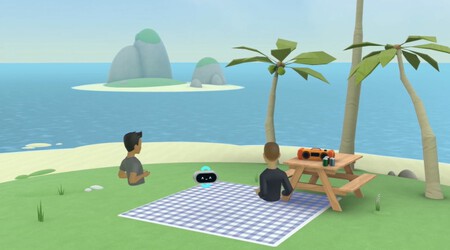 We mentioned earlier the possibility of creating virtual worlds by mere description. In his presentation, Zuckerberg has created live (“all generated by artificial intelligence”, he specified) a 3D ‘cartoon’ landscape with water and sand after entering the voice command “let’s the beach” in your ‘Builder Bot’.

This software is also capable of adding highly specific details (such as the type of clouds known as altocumulus, or different types of objects) as well as generating ambient music of according to descriptions (such as “tropical music”), based on what we have seen today.