Although we recently learned about all the changes that were coming to the public build of Windows 11, such as the redesign of some apps, new features in the taskbar, or Android apps in the OS, the company has returned to offer us a long list of changes that will also arrive soon to users and that are already available for those adhered to their insiders program.

The Insider Preview Build 22557 of Windows 11 is now available, and among the changes we find new features in the real-time subtitle generation system, improvements in the browser, new gestures, and much more .

Windows 11 receives a multitude of changes, and now it looks more like what was announced

Everything indicates that Windows 11 is already counting on many of the new features promised by Microsoft, as well as improving its user experience. Although at its launch we found it somewhat empty and a mixture of ideas still unfinished, little by little we are seeing color in this operating system.

One of the most notable changes in this new update has to do with the new start menu. Now users will be able to customize the pin section and group apps into folders. To do this, simply drag one app onto another and a folder will automatically be generated. However, the names of the folders cannot be edited yet, something that Microsoft has in mind in updating soon.

Another feature that will make an impression on users (especially if you were a fan of Windows 8), are the new touch gestures for Windows 11. The company has added five new gestures to make the tablet experience much more optimal. In this way, we can access the quick settings with just a gesture to activate the airplane mode or Bluetooth, and open the start menu with an improved animation. In addition, we will no longer inadvertently drag a full screen app when touching the edges, since Microsoft has added a function to block the movement. The company also claims that when we rotate the device to landscape mode it will be faster and more responsive.

One of the novelties that Microsoft took advantage of with the arrival of Windows 11 was the way in which windows could be distributed quickly and efficiently. However, certain tweaks to this feature were still missing. Now it comes improved with the possibility of seeing how the window distribution is at the top before making the change. To do this, simply keep dragging the window until we see the icons at the top.

As for another list of striking changes, we also find improvements in its Concentration mode, adding a ‘Do not disturb’ function to better silence notifications, or autogenerated subtitles, which can be activated using the Windows + CTRL + L shortcut and will appear in any multimedia content that includes audio. Subtitles are added to a window, and can be set to be placed either at the top or bottom of the screen. 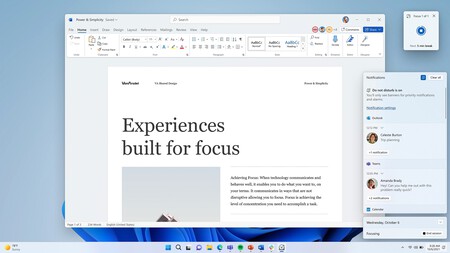 Among the other improvements that Microsoft has announced, it is also worth mentioning the return of being able to drag and drop on the taskbar, one of the most basic deficiencies of Windows that we did find in previous versions. In addition, in the quick settings menu we can now easily add files and from Microsoft they have added a function to see our OneDrive storage more easily in the file explorer.

In a show of improving power consumption in Windows 11, Microsoft has also adjusted the sleep and screen timeouts. However, the company ensures that we will only see these changes after a clean installation of Windows 11. This means that on new PCs we may see somewhat more extensive consumption management. 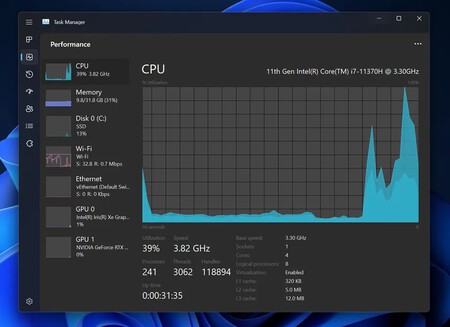 Microsoft has also kicked off the new redesign of the Task Manager, now having a look more in keeping with this new operating system. It also includes the dark mode, and a mode to limit the resource consumption of certain apps.

To see the complete list of changes, you can access the official Microsoft website. All these new features are present in the new build for insiders, which means that we will have to wait a few months until these changes become a reality in the stable version and for all users.