From time to time we want to take a look at the figures from StatCounter to learn interesting details about the most used web browsers or operating systems in the world. This is a very useful website to know which way the market is pulling. Today it’s time to talk about web browsers.

Chrome is still in another galaxy. Google’s web browser has been in the lead for years and by far, reaching a market share of more than 60%. However, where things are most interesting is in second place, which tends to change from time to time. In this case we have that Microsoft Edge is very close to reaching Safari as the second most used web browser. 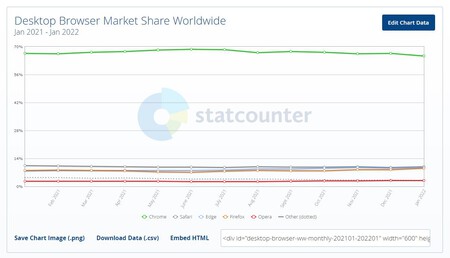 Chromium seems to have suited Edge more than well. And it is that after Microsoft’s various optimizations since it abandoned Explorer and reimagined the experience of its browser, things have been going very well in this regard. Currently the browser has a market index of 9.54%, a figure not far from the 9.84% achieved by Safari during the month of January. The truth is that, for months, Microsoft’s browser has been cutting distances from Apple’s, lately being very even.

The best extensions for Google Chrome, Edge, Firefox and Safari of 2021

Behind Microsoft Edge is Firefox, which is also close but still somewhat distant. We must remember that this web browser is the only one, along with Safari, that is not based on Chromium of the most popular. In fact, at the beginning of the month we could download version 97.

The thing is not very different if we go to the data in Spain. And it is that Chrome achieved a 70.86% market index in January, while Safari obtained second place with 8.87%. As for Opera, its figures are around 3%, being a browser that is still used by very few people, compared to the rest.

That Safari and Edge have that tug of war for second place has to do with the fact that they are the default browsers on iOS, Mac and Windows devices respectively. In this way, in addition to the people who use this browser voluntarily, there are other people who use these browsers because they do not know any other browser, and it is perfectly understandable. As for Chrome, it doesn’t seem that things will change in the near future, even if it does things wrong.