Joppy, a Spanish platform that connects companies with developers, has just published a report on the labor market in the technological ecosystem. One of the most important data in the study is how the pandemic has facilitated the culture of remote work.

“While in 2019 only 2% of positions were offered in this modality (remote), being the preferred option by 39% of professionals, COVID has forced companies to make their physical presence more flexible, which has caused that in 2021 the offer of remote work has grown to 48% of the positions offered“.

Teleworking already shows its real face in Spain: with the control of the pandemic, Spanish companies decide to return to the classic

Joppy has nearly 40,000 subscribed programmers and more than 1,000 technology companies as clients. And the data in this report is based on the supply and demand found within the platform.

These preferences of developers to work from home is not something exclusive to Spanish professionals. In November, a GitHub study concluded that of the 12,000 developers surveyed for the report, only 10.7% expected to return to an office when “the pandemic ends”. This represented a 30% drop from previous years, when 41% of developers went to work in an office full or part time. 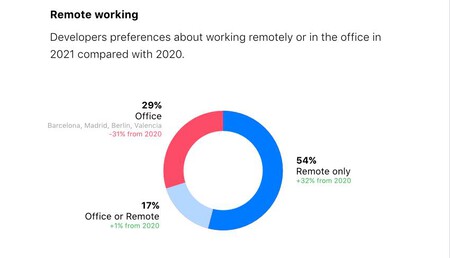 The most demanded profiles in Spain

The study also analyzes the changes in the sector in terms of the most demanded job profiles. The Backend specialist (3 to 5 years of experience) with knowledge of Java or PHP, with an average salary of 45,000 euros per year gross, stands out as the most requested profile among companies in Spain.

In Barcelona there has also been an increased demand for expert backend developers with knowledge of Javascript and C#. Typescript and React are also in high demand in Barcelona among Frontend experts, as you can see in this graph: 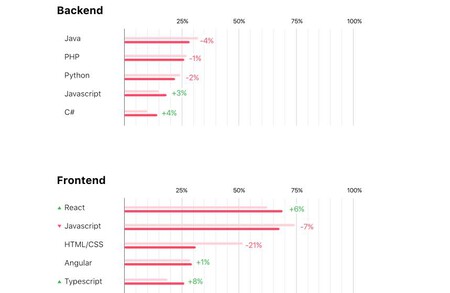 There are some differences between Madrid and Barcelona, ??for example in the mobile environment: while in the capital there is a demand for 18% fewer Android programmers compared to 2019, in Barcelona this demand has grown 11%.

At the national level, the preponderance of the offer in JavaScript stands out in all areas, and in the mobile environment that, despite being equally in demand for Android and IOS programmers, knowledge of the latter it is much lower among programmers. The most difficult profile for companies to find is that of Ruby on Rails expert.