The Linux Foundation published a few years ago an introductory course on Linux to which more than a million people had already signed up by 2020. The original course is available in English and on the edX online education platform.

That same course now has its own Spanish version courtesy of a collaboration between the Universitat Politècnica de València and the Linux Foundation. The course is still completely free and you can sign up today.

Introduction to Linux for everyone 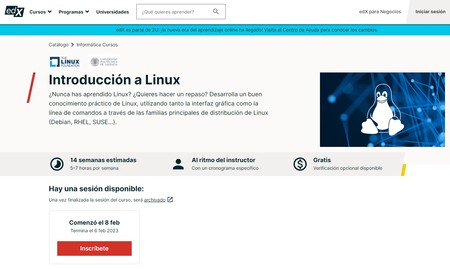 Introduction to Linux is the name of the computer course that consists of a translation of the English version made by the UPV. The material is designed for experienced computer users who have had limited or no exposure to Linux.

The course will introduce you to the various tools and techniques commonly used by Linux system administrators and end users to carry out your daily work in a Linux environment.

You will learn about the main Linux distributions, system configurations and the graphical interface of Linux. They will also teach you basic command line operations, common Linux applications, and much more.

Clyde Seepersad, SVP and General Director of Training and Certification at the Linux Foundation, explains that “The association with the UPV will allow countless people from the Spanish-speaking world to begin their journey in the world of open source by learning Linux, a system that serves as a basis for much of modern technology, from the Internet to financial exchanges, and on most mobile devices.”

This is good news, as this is not the only Linux Foundation course available that has the potential to be translated by one of Spain’s leading technical universities. Last year they released a free course to get you started on Linux kernel development, and starting in 2022 they released three courses for programmers looking to start developing free software.