Last week, the video game distributor Capcom placed a countdown on its website that marked the completion of a major public announcement, of which nothing was known… although rumors quickly began. A remake of Resident Evil? A collection of NFTs? Perhaps a new release of the legendary Street Fighter saga?

Finally, yesterday we learned that this last option was the correct one: Capcom released the ‘teaser trailer’ for Street Fighter 6, precisely 6 years after the release of the fifth installment. The brevity of what has been shown so far only allows us to speculate about the game itself…

…so the attention of the fans has focused on an apparently secondary element, but which is creating increasing controversy as the hours go by: the logo. And it is that that ‘SF6’ with which the game’s teaser closes, so different from the typical logos of the rest of the Street Fighter saga, has been accused in networks of “losing identity”. 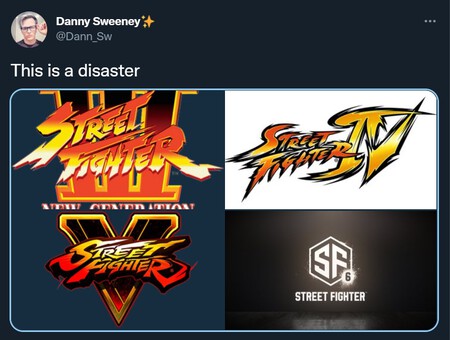 Someone from Capcom has earned a Senp?kyaku full face

Many users commented in the first hours that their problem with the logo was that it seemed excessively ‘generic’, almost as if it had been taken from an image bank. So imagine the shock and outrage when it was discovered that, well, that’s exactly what had happened.

As revealed by user @Aurich, “Ars Technica creative director, graphic designer, and Street Fighter addict,” according to his Twitter bio, the new Street Fighter 6 logo is a template purchased for $80 from Adobe Stock, the image marketplace maintained by the developers of Illustrator and Photoshop.

“I don’t even know what to say. I knew it was generic, but I didn’t realize it was that serious: they looked up “SF” on a stock logo site, rounded a couple of corners and added the 6 . I can’t.”

Indeed, they have made some slight changes to the original (turning a couple of horizontal elements into diagonals), but apart from that, what we find is a marketplace logo (with an aesthetic that is extremely reminiscent of the unofficial logo of the NFTs), which could just as well be linked to Street Fighter as to a French science-fiction convention or a Chinese electronics store.

Additionally, any other video game could buy a logo from the same designer and legitimately use it on their product, which does not help Street Fighter to be recognizable and differentiated of his rivals. In fact, it can even contribute to fans ending up buying the wrong product.

Although, in statements to IGN, the designer identified as ‘xcoolee’ —author of the already famous Adobe Stock image—, has revealed that he is seeking to sell the exclusive rights to the image to Capcom , thus preventing its acquisition by other companies.

In any case, Capcom has just started promoting the new installment, and everything indicates that this aspect of the game will end up varying in the final version that is released on the market over the next this year.