Google Chrome, Microsoft Edge and in general all Chromium-based browsers are usually related to a high consumption of resources and, specifically, of RAM memory, and that is why tests are carried out such as opening 6,000 tabs with 1.5 TB. Although most of the criticisms that are made are well founded, in this article we are going to explain how, in some cases, these browsers can help save a lot of RAM.

One of those has to do with the use of Electron-based applications. As we already know, some applications that work like this are Slack, Discord, WhatsApp Desktop, Dropbox or Microsoft Teams, which means that, when running, all of them need to open an instance of Chromium. Spotify doesn’t use Electron, but it does use something similar like Chromium Embedded Framework. In other words, every time we open WhatsApp Desktop, for example, it is as if we were opening a different browser than Chrome or Edge that we may already be running. If we add Spotify to WhatsApp Desktop, we would have two open browsers, and so on.

This, as we will see, means that, in addition to the fact that the performance of the applications will not be as good as if they were native, they will have a huge consumption of RAM. If we also need to have a few open at the same time, as is our case, things go off. Let’s take a look at how each great Electron app affects them separately, and how using Microsoft Edge has helped us mitigate the heavy resource consumption.

Electron, that bottomless pit of resources

If the machine we tested, a MacBook Air M1 with 8GB of RAM, had more resources, we probably never would have worried about consumption at this level. But no matter how much unified memory there is with the new Apple chips, magic doesn’t exist, and 8 GB of RAM is enough for what it’s worth.

In this context, and requiring that WhatsApp, Spotify and Slack be open for almost the entire working day, the one in the images is the RAM consumption reported by the Activity Monitor in macOS >. In Windows 10 with the Task Manager the thing is equivalent. The same happens with Windows 11, which has not included new features in this regard (nor did it have to, the problem is with the applications, not the system). 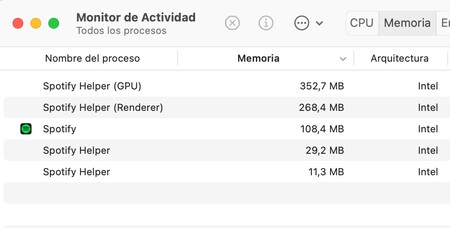 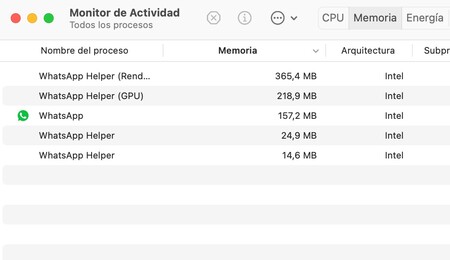 As we can see, all Spotify processes total 770 MB of RAM, WhatsApp 781 MB and Slack 696.5. In total, 2.2 GB of RAM for three applications that could take up much less as browser tabs. And all this considering that we don’t use Teams, Dropbox (it was uninstalled precisely because of its resource consumption, in its place is Maestral, a native and open source client) or Discord. With those active simultaneously, the consumption would skyrocket even more.

Given that not everything can be solved with native clients like that of Dropbox, since they do not exist, we began to think of alternatives to lighten the load of RAM on the computer, because in this computer it has arrived to scratch the pagination. And the conclusion, in the absence of testing, seemed clear: stop using Safari as a browser, use Microsoft Edge or Google Chrome and, with them, make use of the progressive web applications (PWA) of Spotify, Slack and WhatsApp Desktop, which once Once installed with the method that these browsers provide, they open as just another system application.

Microsoft Edge (or Chrome) and PWAs to the rescue

The next step was clear. “Install” the web versions of those three web applications. To do so, we need to go to the Edge Settings (the three dots… on the side). There we will see the “Applications” option, and if we do not have the website we want installed, we will be offered the option “Install this site as an application”. In the example of the image we have done it with Microsoft Teams.

The next thing is to study your RAM consumption in Activity Monitor and in the browser’s Task Manager, once we have logged in and all the services are working. Edge has a minimum consumption of RAM even when nothing is open, which obviously must be taken into account when calculating the total consumption, and if we want to divide by application.

Looking for “Edge” in Activity Monitor, the system tells us that the browser and its three webapps consume 1,655 MB, counting 30 MB per webapp that are not included but that the monitor picks up looking for the separate app names. Edge’s Task Manager indicates 1,620 MB, which includes 120 MB of two extensions, which as we can see also add up to its RAM ration.

That is, without the extensions we are talking about 1,500 MB, approximately. Compared to the Electron applications, the RAM consumption on this device is 1.5-1.62 GB versus 2.2 GB. That is, about 600-700 MB of savings, and all this without taking into account another part.

Total consumption of Edge with only the Spotify, WhatsApp Web and Slack PWAs open.

The other part is that 1.62 GB is a RAM consumption that already includes the main browser process. In other words, if we open more tabs, there will be a base consumption that will no longer go up. Against this, each Electron application has its own consumption, and we will still need to open Edge or Chrome to navigate. In our case, with just the Genbeta tab open, that’s 696MB more in Edge (or 626MB in Safari if we choose that browser). That is to say, in reality the total consumption if we choose the Electron applications plus a browser tab is 2.2 GB plus 0.696 GB, which yields 2.89 GB.

The saving of resources is so great that, in computers with little RAM, it can compensate a lot despite what is lost

If we only use Edge with PWAs and one tab, Genbeta, Edge Task Manager reports 1.75 GB. In total, then, we save 1.14 GB of RAM in a more or less controlled scenario and with two extensions. This saving compared to Electron applications, in a limited 8 GB RAM device, gives us the life to dedicate resources to other tasks and not have to resort to swap space. The more Electron applications we can replace, the greater the savings.

What do we lose with PWAs compared to Electron applications 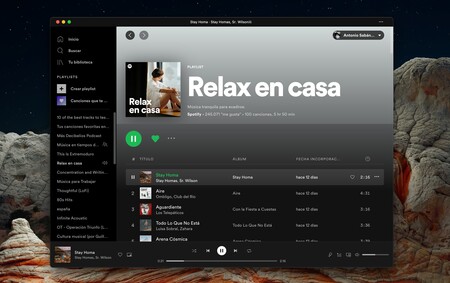 Apparently nothing is lost with the web version of Spotify, but when using it you miss things like being able to choose the playback quality.

Evidently, with this transition not everything is rosy, and in some cases relevant things are lost. As I said before, with Dropbox the browsers did not offer any alternative, and I had to resort to a third-party client. In WhatsApp, for example, the shortcuts are lost, since the version used to create the installation with Edge or Chrome is WhatsApp Desktop, which does not have them.

Even so, both with it and with Slack I don’t feel like I’m losing anything beyond the generic aspect of having a more dedicated application versus a browser, and that means that, although we can continue to receive notifications, they will all arrive with the browser logo, and the Dock icons, in the case of macOS, will not reflect that there are new messages.

According to Microsoft, Edge already supports this functionality, but it is up to the developers to implement it. Another lack is that now, if I close a tab like Spotify or Slack, the service closes, in contrast to the native functionality of macOS or Windows, where these services continue to run and notify without active windows. Now, therefore, you have to control much better when you close tabs.

Despite having notifications, PWAs on macOS do not show a number or badge in the Dock.

Lastly, Spotify is the service that is a little more lame, because although its web application now supports control with the multimedia buttons, the service changes slightly and, for example, users premium does not allow them to choose playback quality or download offline. In that sense, since this Mac allows it, what I am probably going to try is to install the version of Spotify for iPad, which will work as native and allows what I miss. Even so, due to the RAM savings, it’s worth it for now.