After its launch less than two months ago, all kinds of variants of the popular Wordle game have emerged, frequently with changes in theme —there are geography or mathematics— or language —in Spanish , Catalan and multilanguage (with extra letters), for example—.

Most of these variants are, like the original game, intended to be played on the web from a browser, although you will also find mobile apps in the Play Store and the Apple Store based on it. concept.

However, there are more ways to play Wordle, some certainly unexpected. And one of them is to play it in Excel. Yes, yes, within a spreadsheet.

The two options that we bring you today are in English… but it also allows you to ‘mess around’ with the files, in case you want to translate them

There are two options to do it if the idea seduces you. You can find the first one here, uploaded to Google Docs, although you can also download it and open it in your favorite office suite.

It’s the brainchild of an Indian user named Akshath Killa who posted on Twitter a few days ago that he’d been “bored”, so he had chosen to devote his time to what “basically is an Excel version totally Wordle playable”.

The current version of the file allows choosing a ‘game number’ between 1 and 500, each of them linked to a different word: we must mark it in the salmon-colored box in the header . 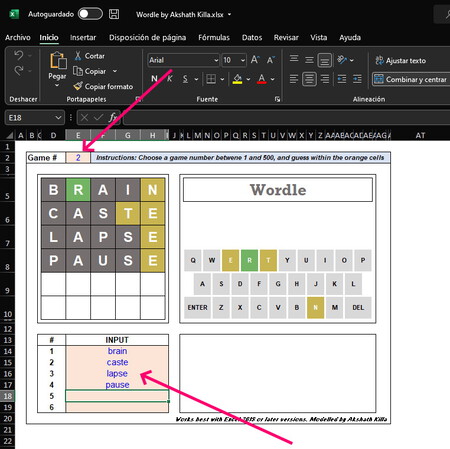 Further down, we will find another space in salmon color: 5 lines in which we can successively write the words; As usual in this game, matching but misplaced letters will be highlighted in yellow, and 100% matching letters in green.

The second option to play Wordle in Excel came out a few weeks ago, and it has the negative aspect of forcing us to enable the use of macros in Excel in order to play a game (which means, invariably, need to download it, since online editors do not support this function).

Daniel Rodríguez, creator of Wordle in Spanish, speaks: this is how he adapted the fashionable online game in “two afternoons”

We can download the *.XLSM file from here (this is a macro-enabled Excel spreadsheet). Once opened, we must make sure to enable the macros and, later, press the ‘Restart’ button.

Then, we can write in the blank boxes and press the ‘Check’ button to verify our level of correct answers letter by letter, up to the limit of 6 attempts. 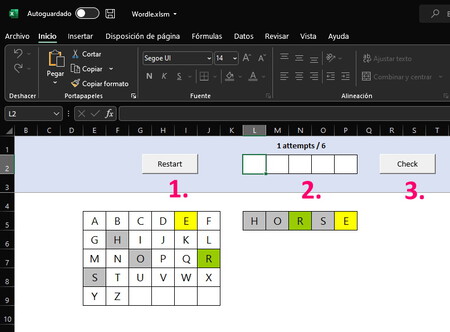