Today we woke up to the terrible news of Russia’s attacks in different cities and regions of Ukraine, a couple of days after an invasion was reported. Images of people in fear, escaping from the cities in long caravans of cars and bombings.

At a time when social networks are a loudspeaker and a means of communicating, in addition to journalists on the ground, we have at hand publications and breaking news that are published on social networks, which comes from the hand of the people suffering these attacks but also by people from all over the world who share videos and photos that reach them. Although Twitter
has been blocking accounts reporting on the Russian attack on Ukraine citing “human error”, there is a lot of information out there.

A new 1973: the invasion of Ukraine sets Europe on course for its worst energy crisis in half a century

If you go to Twitter, for example, and search for the hashtag #Ukraine (Ukraine in English) or #UkraineWillResist you will see many videos, photos and posts telling news. They are “Breaking news” in its purest form.

There are even profiles created on Twitter, on purpose to report this invasion that has just begun, such as Ukraine Live. It has more than 7,000 followers in a short time (the first post is from today, February 24, in the morning). This profile does not follow anyone. At no time does he explain who is behind the information he offers.

TikTok: a wealth of followers in hours

For its part, one of the most relevant social networks of the moment, TikTok, is also being key in this informative process of last-minute videos. We can see how newly created profiles have tens of thousands of followers (or even hundreds of thousands like this one named Ukraine Invasion) in their accounts that are fed with videos, accompanied by hashtags like #russia #ukraine #russiainvadesukraine or #ukraineupdates, among others.

A few days ago, TikTok was key in revealing that Russia seemed to be lying while claiming to withdraw. Russian President Vladimir Putin and top Russian officials denied that Moscow was preparing an invasion of neighboring Ukraine. But the videos posted on TikTok and other social media platforms were telling us a different story.

In areas of Russia and Belarus close to the Ukrainian border, citizens uploaded videos in which sophisticated weapons were seen and Russian military vehicles speeding along highways and local roads towards positions close to Ukraine.

A phenomenon that is not new

The use of social networks to report from the field is not new. In the war in Syria, at a time when there were few journalists on the ground due to the danger posed by bombing, we saw how Syrian citizens, with a mobile phone and an Internet connection, were reporting on the situation. This phenomenon has obviously given rise to much research.

Already in 2015, a study talked about Spanish war reporters in times of social networks. “The appearance of the Internet and social networks have caused changes in the information paradigm, currently information no longer flows unidirectionally, giving rise to new actors, the so-called citizen journalists.” sees these as possible enemies for journalism.

Beware of misinformation in times of war 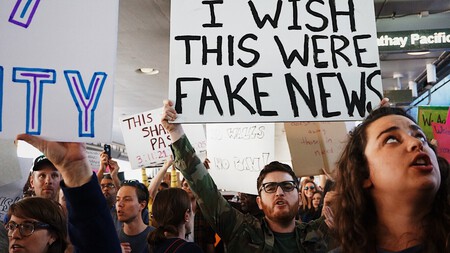 At a time when everyone can report everything, when social networks are a loudspeaker for anything someone wants to spread, we have to be very careful in general with the information we consume, and to contrast and verify what we read or make sure it has a reliable source of information.

The conflict in Ukraine is brewing online: Microsoft discovers massive ransomware attacks that are not resolved or paid

When we talk about issues as important as a war, with all the suffering it generates, it is even more important to have accurate information. Because in addition, it is nothing new that propaganda is used as another weapon of war (and Russia has experience in this area). So there are two open fronts in terms of disinformation: those that may try to sneak in from the governments participating in the conflict and those that may be published by people, either to misinform or due to ignorance.

Different news circulating on the Internet

But there is already a lot of fake news going around the internet like wildfire. Personally, in fact, I have already seen a few news stories of dubious veracity, such as a woman on a bus carrying a gun. I read that she was from Russia because the government was already instructing citizens to be prepared for war.

Apparently, in other posts they said that she was a young woman from Ukraine prepared to fight alongside the men of her country to protect herself from a possible invasion. If you look for more information, you find out that she is indeed a Russian woman, but she is a model posing and in a photo that is not new , as Maldito Bulo has published: