The launch of Firefox 97 is scheduled for February 8, 2022, which means that you can download it from the official website throughout the day, or update directly from the browser, both on Windows and Linux. and macOS.

If you don’t want to wait, you can always choose to go to Mozilla’s FTP servers where it’s already been released, and pick up the version you need for your system. This version is a minor release, albeit with quite a few breaking changes if you’re a developer. For users, the main novelty is the colors. 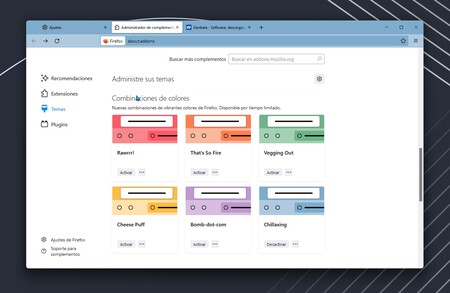 If this is your first time installing Firefox, the browser will now give you a choice of different color schemes to customize its appearance. Unlike the usual themes, these combinations or “Firefox Colorways” are more in the style of what Vivaldi offers.

The colors apply to the window frame, the URL bar, and the new tab page, and adapt depending on whether you use the dark or light theme in the browser. The new combinations replace the old ones and may change again in the future, as Firefox says they are there for a limited time. For all your other customization needs, you can always use the official Firefox Color extension.

Firefox against all: the world of browsers is conquered by Chromium

The other visually relevant change in Firefox 97 is that the scroll bars have been updated to the style of Windows 11, which puts the Mozilla browser at on par with Chrome and Edge in that small respect.

It may be a minor update, but after the brief debacle with Firefox 96 that left users offline, this has been a more discreet release. In a sea of ??Chromium-based browsers, Firefox has basically stood alone against everyone, and for some that’s more than enough reason to support the project.